Affectionate, demanding, vocal and high energy, the Oriental Shorthair is a Siamese in a designer dress! The Oriental cat is a tubular, lean cat with a long, whippy tail and wedge shaped head, set off by a pair of beautifully flared, large ears. They have almond shaped eyes, a straight profile and a strong chin and long neck and come in a large variety of patterns and colours.

Their personalities are also very similar to the Siamese. Oriental Shorthairs are social, intelligent, and active cats, some say the ideal companion as they are eternally seeking affection and approval from their human slaves. They often remain playful into adulthood, with many enjoying playing fetch and chasing each other around the house at 3am for entertainment. Despite their slender appearance, they are athletic, lithe and muscular and can leap into high places, often getting themselves into precarious situations. They generally prefer to live in pairs or groups and also seek human interaction. Orientals are a highly strung breed, prone to stress and are highly attuned to their environment. They generally get on well with other animals and children provided they are not chased, provoked or bullied.

Orientals are extremely curious, much like their Siamese brothers and sisters and may get into situations where they are unable to defend themselves. For this reason their territory should be limited to the home and a secure outdoor area where they can exercise but not escape your property to challenge the neighbour’s dog to a duel or chase an interesting looking car up the road. 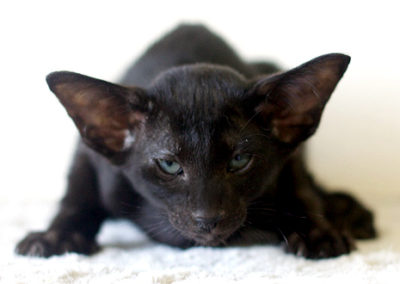 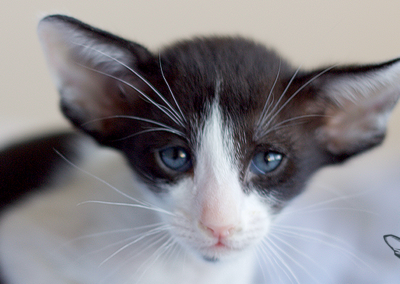 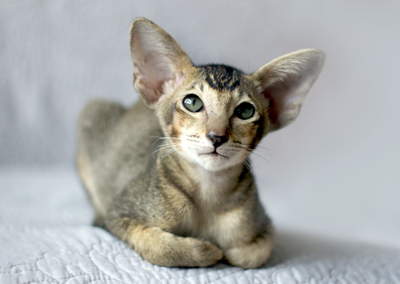 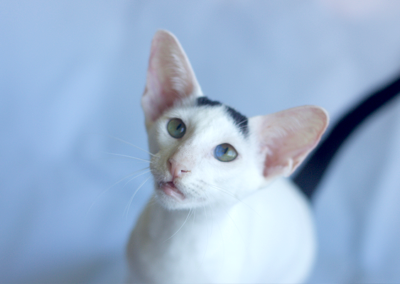 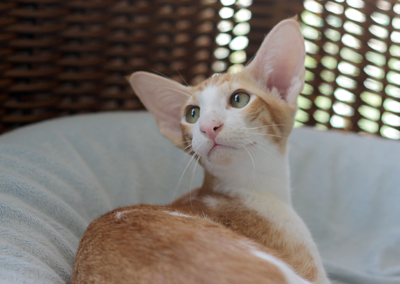 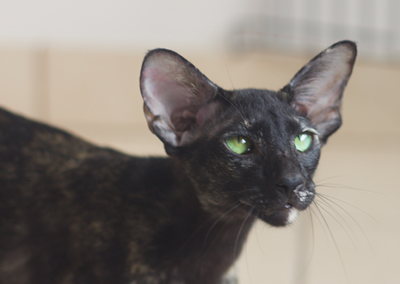 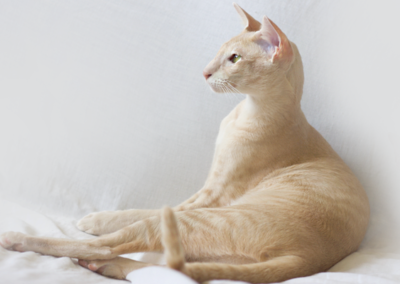 Origin of the Oriental Shorthair

The Oriental Shorthair was originally developed in the 1950s, in the UK, to develop a cat breed like the Siamese that has a full coat of colour. Since then, the breed has developed enormously and over 300 colour and pattern combinations are widely accepted today. Colours include all of those in the Siamese as well as the silver varieties. Siamese and Orientals are bred together to improve the gene pool and offspring of these cats are considered pure bred. Both Orientals and Siamese live harmoniously with other breeds, that can tolerate their rambunctious natures.

The story of the Oriental is a man-made ideal realised. More than most other breeds of cats, the Oriental Shorthair has been produced through our knowledge of genetics and logical aspects of cat breeding.

The Oriental Shorthair has no legends to justify its existence, no history of exotic lands of origin, no mystique of religious importance. The early colonial stories of the Oriental Shorthair came from the dark depths of the early years of the 1970s. The breed’s pre-colonial history in England with a few forays in America, dates to only a couple of decades before that. The Oriental Shorthair is, in fact, a thoroughly modern cat.

The Oriental is actually nothing more or less than a Siamese cat with a designer wardrobe and we all know that the Siamese has a history that extends into the very distant past. The people of Siam did not regard the pointed cat as their only prized feline. They knew and loved cats of many different colours, including the Si-Sawat (blue) and the Supalak (copper-brown). These cats were not only the ancestors of today’s Korats and Burmese; but were also the solid blue and chestnut (chocolate) Siamese cats of that time. Currently, in Bangkok approximately 20% of domestic cats are pointed; the rest appear in the full spectrum of feline hues.

The Oriental was originally imported to South Africa from the UK in the very early 80’s once the breed had gained significant popularity in Europe. Linda Emery was said to be the first to import the breed, a chocolate Oriental male. The first Oriental bred in the country was a black female with vivid green eyes at Dumas Cattery bred by Bill Thompson and Douglas Bam. Yvonne Pietersen imported a black female from Holland named Mirrela van Isis and later, a kitten from Australia was imported by Thompson and Bam, Dumas Ashanti. Yvonne went on to import a Seal Point Siamese around the same time who had been mated in Australia to an Oriental and produced two black selfs in South Africa. Gail Nel from Westwood Cattery imported a lilac Oriental around 1985 that was also subsequently used by Karnaki Cattery (Karen Pepler) for their first litter.

Yvonne bred the first oriental torties in South Africa out of a red Oriental male she bred, who had no barring, owned by Barbara Schambacher. The first tortie shown by Yvonne received mixed reviews at shows, one judge reporting “This cat belongs in an ally digging in dustbins,” who later apologised for her comments. The first bi-colours in South Africa were developed by Dumas Cattery and their breeding partners by outcrossing Orientals to bi-colour Cornish Rex. The most well known was named Dumas Jigsaw Puzzle, a black and white bi-colour that was the most “Oriental” in type out of his litter.

The first medium hair Orientals (known in some countries as Javanese) were bred by Isis Cattery (Mariette Kruger and Patti Paterson) in the early 90’s out of a smoke tortie Oriental female bred by Yvonne Pietersen to their imported Balinese stud. Acceptance for the longer-coated variety for championship status went ahead with the help of Su Jacobs, a well-respected judge and breeder in South Africa.

The Cape cat fancy remained purists long into the late 90s and did not advocate the outcrossing of Oriental to Siamese, nor the addition of these weird and wonderful new colours and patterns till later, but enthusiastic breeders continued with breed development countrywide. Today there are a fair amount of experienced Oriental breeders and colour/pattern combinations in Southern Africa. The breed was accepted worldwide as a natural outcross for the Siamese and later accepted as an outcross for the Peterbald.

Many thanks to Barbara Schambacher, Karen Pepler, Yvonne Pietersen, and Mariette Kruger for assisting me in compiling this article. For shared use, please credit me accordingly and kindly send a link back to this page for reference.