Affectionate, demanding, vocal and high energy, the Siamese has a rich, long history. The Siamese cat, like its Oriental brothers, is a tubular, lean cat with a long, whippy tail and wedge shaped head, set off by a pair of beautifully flared, large ears. They have almond-shaped deep blue eyes, a straight profile and a strong chin and long neck and come in a large variety of colours distinguished by the himalayan pointed pattern.

Their personalities are also very similar to the Oriental. Siamese are social, intelligent, and active cats, some say the ideal companion as they are eternally seeking affection and approval from their human slaves. They often remain playful into adulthood, with many enjoying playing fetch and chasing each other around the house at 3am for entertainment. Despite their slender appearance, they are athletic, lithe and muscular and can leap into high places, often getting themselves into precarious situations. They generally prefer to live in pairs or groups and also seek human interaction. Siamese, like Orientals are a highly strung breed, prone to stress and are highly attuned to their environment. They generally get on well with other animals and children provided they are not chased, provoked or bullied.

Siamese are extremely curious, much like their Oriental brothers and sisters and may get into situations where they are unable to defend themselves. For this reason their territory should be limited to the home and a secure outdoor area where they can exercise but not escape your property to challenge the neighbour’s dog to a duel or chase an interesting looking car up the road. 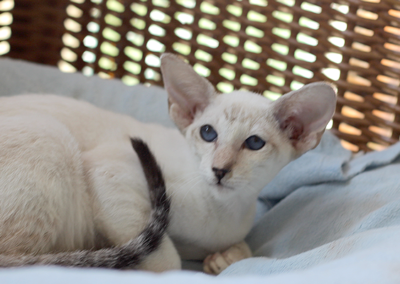 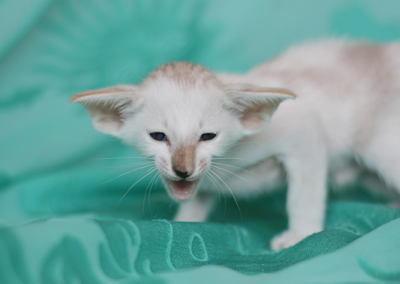 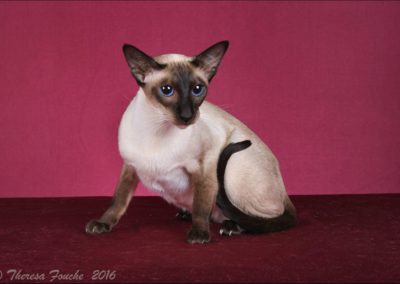 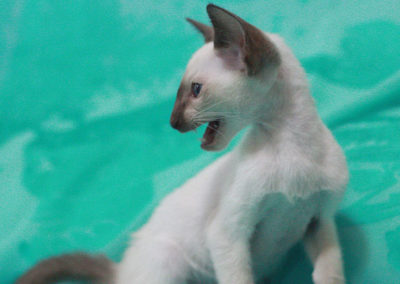 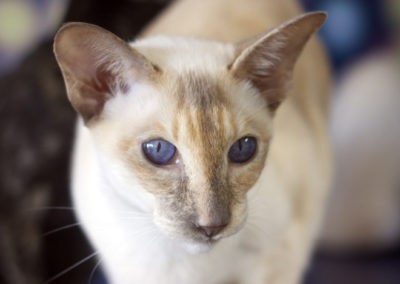 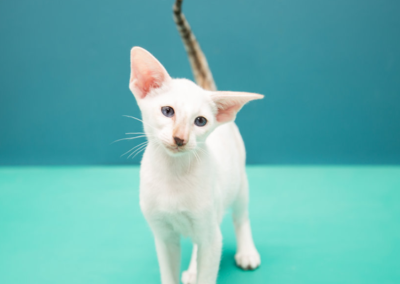 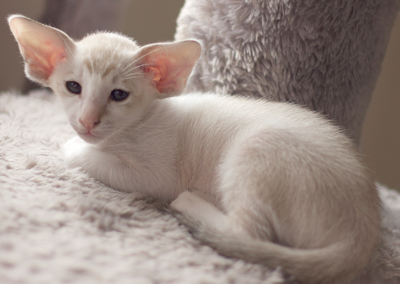 The Siamese originated from the local pointed cats in Thailand, formerly known as Siam. The breed was first recorded in the Western world in the mid-1800s. The Siamese is the epitome of elegance and balance and is a great conversationalist. Their beautiful, sleek, pointed coats and stunning deep blue eyes are the distinctive characteristics that have intoxicated cat fanciers from the very start. They love to be involved in household tasks and to be with their human slaves. Today’s Siamese look far different from their ancestors, bred to be lithe, angular and elegant, rather than the rounder-headed earlier examples of the breed.   The modern Siamese has been around as early as the 1960’s where their apple head counterparts have been renamed the Thai and developed as a separate breed entirely in more recent times. Siamese come in many different colours that are accepted worldwide, namely, seal, chocolate, blue, lilac, caramel, red, cream, apricot, cinnamon and fawn as well as many patterns such as tortie, tabby, bicolour, calico, silver, shaded and self.
There are many theories about the origin of the Siamese. The Seal Point Siamese was known as the Royal Cat of Siam because it was found in palaces. “The Cat Book of Poems” depicts pale coated Seal Point Siamese, describing them as having black tails, feet and ears with white hair and blue eyes. No one really knows what the cats of ancient Siam looked like or whether they were bred for body type or purely for colour and pattern with little regard for shape. Another problem is that artists often stylized their illustrations.
The extinct Annamese from Vietnam is also considered by some to be the ancestor of modern Siamese and that the Siamese cat of Thailand arose through interbreeding Birman and Annamese cats. An early description of the Seal Point Siamese in 1676 calls it “Vichien Mas” (meaning “diamond mouth”) and drawings depict extreme expression of the colourpoint pattern – dark ears, nose, paws and whiskers.
Although apparently favoured as palace cats, there is no clear record of an distinct Siamese breed until the 1800s. The British became interested in Siamese cats and imported them from Siam. The earliest documented imports were during the 1870s, but these were apparently not bred. In 1884, the departing British Consul-General Gould was given a Siamese cat by the Siamese king. He brought the cat to England and its progeny were exhibited at Crystal Palace in 1885. The early Siamese cats were round-headed, solid and muscular, but even so, their appearance was so extraordinary that they were described as an “unnatural nightmare of a cat”. In Ceylon, the Siamese cat was, for a while, known as “Gould’s Cat”, having been introduced there by Mr Gould. The Burmese Sacred Cat was known to early British cat fanciers as the “Gold Cat”. A wild cat of the region was known as the “Golden Cat” (Temminck’s Golden Cat) or “Bay Cat”. HC Brooke believed these similarities of name to be the reason that Temminck’s Golden Cat was claimed to be an ancestor of the Siamese. The first champion Siamese, “Wankee,” was born in Hong Kong in 1895 and exhibited in 1898. He was relatively large and round-headed by modern standards, but had a more distinct muzzle and longer body than modern appleheaded (as in the rounded headed “applehead” dolls of the USA) Siamese – more of an intermediate type.

“There is a legend that the light-coloured cats with blue eyes represent silver; the dark cats with yellow eyes, gold; and that the possessor of both will have plenty. This rather gives the idea that originally the eyes of the pure chocolate cat were yellow, and that the present variety has been crossed with the royal cat. It is a great mistake to mix the varieties, as the result after they become adult is a blurring of the markings and a patchy coat.” What Miss Forestier-Walker was describing was the range of colours from the brown Burmese (the “Burmese cat” depicted in the 1903 book was an Oriental ticked tabby), through the “blurred” or less distinct markings of the mink range (Tonkinese) to the sharply defined colourpoint of the Siamese.

Champion Wankee was bred in Hong Kong in 1895, the offspring of a female kitten stolen from the Palace in Siam, and imported to England aged 6 months. His owner, Mrs Robinson, wrote “One of the most beautiful of the short-haired cats is undoubtedly the royal cat of Siam, and the breed is increasing in popularity; but is never likely to be common, as the cats are delicate in this country. […] The [standard of] points of the chocolate Siamese are the same as the royal, with the exception of body colour, which is a dark rich brown all over, thus making the markings less noticeable. All Siamese darken with age, and when they get dark there is a tendency to call them chocolates. I know of only one real chocolate – Mr C Cooke’s ‘Zetland Wanzies’ – so consider them more likely to be a freak than a distinct variety.”

A great deal has been written about the origins of the Siamese breed. Sydney W France, editor of “Cats and Kittens” magazine, wrote the book “Siamese Cats” in 1949. This was the first major publication on Siamese cats since 1936.

“The history of the Siamese in this country is a very short one, and it is true to say that they have only been here within living memory, and that the first ones actually were from The Royal Palace of Siam. Even on this point there is much controversy and it is interesting to note that the first Siamese of which there is any record were said to have been brought to England in 1884 by Mr. Gould who was then Consul General in Bangkok at that time. In 1886 a pair of cats and two kittens were brought to England by Mrs. Vyvyan, these had actually been procured from the King’s Palace in Bangkok. In the same year, Mrs. Walker, the General’s daughter, brought over one male and three females. There is no doubt that at that time the true Siamese were kept in the Royal Palaces and Temples, and that few of them ever found their way from there except as gifts, which were then considered as of great worth.”

France also reproduces a letter Mellen received from Dr. Hugh M. Smith, Adviser in Fisheries to His Siamese Majesty’s Government between 1923 and 1934. In addition to the Siamese cat, he mentions a “mauve” cat which is no doubt the Si-Sawat (Korat) and kinked-tailed cats which were, and still are, common throughout Thailand, Malaysia and Singapore (and in the modern Japanese Bobtail breed).

“I was well Acquainted with cats in Siam, but made no special study of them. There appear to be two races peculiar to the country: the common form with pale fawn colour, black or dark brown feet, tips of ears, tail and muzzle, and blue eyes, well-known to cat fanciers all over the world, and a form of uniform mauve or Maltese colour with yellow eyes. There are no “palace” cats in Siam. There are no “royal” cats, although the strikingly marked creatures would be the natural ones to be kept in palaces. Any person can have a Siamese cat, and as a matter of fact there are many people outside the palaces and many foreigners who keep such cats as household pets. There are no “temple” cats. The Buddhist priests, who do not live in the temples but in special buildings in the temple grounds, may keep cats, as they do dogs. A Siamese prince whom I know very well was visiting in London and was interviewed by one of the thousands of Siamese cat fanciers there. He told her there were more Siamese cats in London than in all Siam.

You probably know about the cat not peculiar to Siam but found over much of South Eastern Asia, which always has a sharp kink near the tip of its tail. It is of various colours but never of the special Siamese cat colour, and is of no interest except for its tail.”

There is no doubt that Siamese cats came from Siam (modern day Thailand), but some disagreement in the 1940s as to their “royal” origins. The first Siamese fanciers club was founded in Britain in 1902 at which time they were apparently variable in type. Possibly the conformation depended on which cats the early Siamese had been out-crossed to, there being few pure Siamese in the country at the time, or to the variability of imported cats and inbreeding from a limited gene pool.

Early photos show differences between the “compact” cats and the “lithe” cats, but the difference is nowhere near as extreme as that between modern “classic” and “old-style” Siamese.

The Siamese Cat Society of America was founded in 1909 although the date of their arrival in the United States is not precisely known. Many early Siamese had kinked tails and cross-eyes or a squint; these faults have largely been bred out of modern Siamese.

Tabby Point Siamese had been mentioned as early as 1902 in Britain. Between 1944 and 1949, they were bred in Scotland and known as Silverpoint Siamese. They were introduced to the cat fancy at a London cat show in the 1960s and in 1966, the Tabby Point Siamese was granted recognition by the Governing Council of the Cat Fancy (GCCF).

By 1986 the old-style Siamese had vanished from the showbench and many people assumed that Siamese cats had always had a long body, wedge-shaped head and disproportionately large ears. Siamese cats had become extreme parodies of the original imports.

Additional colours were introduced through out-crossing, however they have been so extensively back-crossed with Siamese cats that only the most ardent purist would claim that they are not Siamese!